Every now and then when I meet new people, they’re asking me how and when did I started climbing. I usually tell them - it was the summer of 2010, when I took it seriously. The full story is a bit longer. I don’t actually remember the year of my first climbing attempts, it was probably around 2001. What I do know is that I was in high-school.

One of my friends had a brother who gave us a rope, 4-5 quickdraws, a normal climbing harness and another one, made up from sewn together seat belts from Lada. We knew some routes existed on rocks near the town so we went there and figured it out this way: whoever is climbing takes the good harness and the quickdraws, goes up until there are no more quickdraws and then climbs down. The belayer gets the belt-harness and the figure of eight belay device, then we swap roles. We didn’t knew anything about abseiling and free climbing back then, just two teenagers trying out something new.

We didn’t managed to kill ourselves which was good. Also, we both liked climbing. Life went on and we didn’t had a chance to continue our adventures - we had to study for exams and similar stuff.

After a couple of years, now in university, I tried again. There were sport classes we could choose from and climbing was on the list. Unfortunately it was indoors, and always on toprope, so I didn’t liked it very much.

One of the items in my new year`s resolutions for 2008 reads:

“Try skydiving again or at least bungee jumping or something.. just to feel the pull from the other side. Maybe some rock climbing would be good too, haven’t done it for more than 3 years. Also more hiking this year …”
Well, I haven’t been doing skydiving recently but I’ve bungee jumped from a hot air balloon, which counts. Anyway, back to climbing. 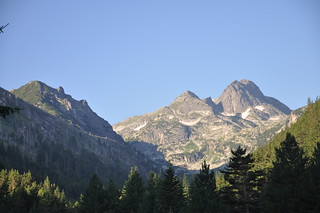 This is how it all started for me - from the cradle of Bulgarian alpinism - Malyovitsa.

Another few years passed by and my girlfriend told me that some colleagues from her group are going to a gym for climbing, maybe we could try? So we did, and this time I was fascinated. After a few sessions I’ve subscribed for a week long climbing course in the mountain. My idea was not only to refresh my knowledge but mainly to meet people who are serious about outdoor climbing. This was in July 2010 and I consider it the date when I started climbing properly.

Also, after some time, that girl who kind of re-introduced me to climbing broke up with me (we’re still friends), because she thought I was more interested in climbing than anything else, including her. Which, in retrospect, was probably partially true.